HHK is grateful to South China Morning Post for including Tim’s views in its coverage of North Korean ‘slave labor’ in China:

The UN’s recent sanctions will hurt North Korea’s citizens the most, according to Tim Peters, a prominent advocate of Helping Hands Korea, an NGO that assists North Korean refugees.

“As noble in intent as the UN sanction on North Korean workers in China and Russia may be, one of the unintended consequences will probably be pulling the rug out from beneath the livelihoods of the workers themselves who wait in line and volunteer for these cross-border jobs even at virtual slave wages,” he said.

“It’s a damning commentary on the plight of DPRK citizens that even when 70 to 80 per cent of their foreign wages are skimmed off for the military whims of Kim Jong-un, the paltry remains are better than wages available to them inside the secret state.” READ MORE: 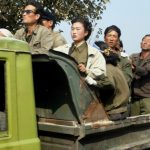