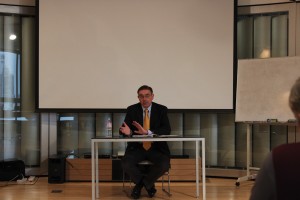 Stressing the growing challenges to NGO’s within the tense security environment on the Korean Peninsula as well as on the Sino-DPRK border, Peters used four specific examples from his own NGO project strategies to stress the critical importance of adopting unconventional approaches to enable continued assistance to North Koreans in crisis under current conditions. Now in the 21st year of leading HHK’s philanthropic and humanitarian activities, Peters outlined ongoing innovation and unconventional approaches to his organization’s food, medicine and clothing project, evacuation of North Korean refugees along the so-called ‘underground railroad,’ protection and foster care for orphaned children in China who’ve lost their North Korean refugee mothers to forced repatriation by Chinese officials, as well as non-traditional advocacy and awareness-raising activities on a global scale. (Some additional details are available upon request to tapkorea@gmail.com)